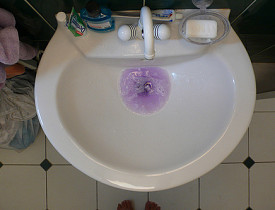 Considering what they do, it’s a miracle of sanitation science that drains don’t smell up our homes all the time. Thankfully, they don’t. So what’s up with a drain when it’s suddenly stinky? Most likely, it’s one of two things: crud inside the pipe (which may be related to a clog) and sewer gas (which is always present in part of your drain system but isn’t supposed to get into the house). Usually a smelly drain problem is easy to solve. Gross, for sure, but easy to solve.

Methinks This One Stinks

Sometimes it’s hard to know which drain is the stinker, so here’s a simple trick: Cover the suspected smelly drain opening with tape or a plastic bag (or both). Let the room air out for a bit, then give it the smell test. If the smell is gone, you’ve found the culprit. If not, move the tape or bag to the next likely suspect and test again.

Of Clogs and Crud

A really gunked up drain can smell enough to carry into a room, and there are a couple of good clues that this is the source of your problem. A slow drain is one indication. A partially clogged drain doesn’t get rid of waste effectively, leading to more crud buildup. Ultimately, this may lead to a total clog, but it can take a long time. Meanwhile, the buildup just gets worse. In other words, clogs beget crud begets clogs. Nice, huh? The solution is to clean the drain thoroughly with a snake (see below).

The other way to tell if your problem is crud is the smell. A dirty drain smells bad, but there’s nothing like the gaseous pungency of a sewer smell in the house. The latter indicates a different drain problem (discussed in the next section).

A few drains that are most prone to crud-related smells and their solutions:

If your drain smells like sewage, that’s probably exactly what it is, or at least sewer gas. Every drain in your house has (or should have) a trap — a U-shaped piece of pipe that holds a small amount of water at all times. The water serves as a plug to keep sewer gas from rising up the drain (toilets have their own internal version of a trap). This simple system works beautifully unless one of the following happens:

If you suspect a dry trap, run water in the fixture slowly for a few minutes, then shut it off and do a smell test. The water should fill the trap and stop the sewer smell in your bathroom, kitchen, etc. This mayhelp diagnose the problem but not solve it. However, most venting problems can be remedied by installing an Air Admittance Valve (AAV), a pipeless air vent that can go almost anywhere along a drain line (talk to your friendly neighborhood plumber).

Clogs Are Tougher Than You Think

Has this ever happened to you? Your drain smells bad or is otherwise acting up. You suspect a clog, so you pour in some drain cleaner. Nothing happens, so you pour in some more drain cleaner. After a third dose of cleaner you surmise that the drain must not be clogged, assuming that nothing could withstand such an onslaught of nasty chemicals. But guess what? A clog can.

With a lot of ordinary clogs, you could turn your smelly drain into a chemical spill site with no effect on the clog whatsoever. That’s why professional plumbers clean drains with snakes (or pressurized water) and not chemicals. They also tend to snake a drain repeatedly even after the blockage is cleared. This is to remove the buildup of crud along the walls of the drain pipe, which has almost undoubtedly been exacerbated by the clog. So the next time you think a clog is causing a smelly drain, use a snake, not drain cleaner.

My Remodeled Bathroom Is Modern, Clean And Beautiful

Cast Iron Bathtub Replacement Was Definitely Not A DIY Project

Top Cities Covered by our Plumbers